Frederick Douglass, one of our nation’s greatest abolitionists, was born in February 1818. The man who would grow to escape slavery in Maryland would later choose to celebrate his birthday on the 14th of the month. Douglass was prominently known for his anti-slavery writings and also advocated for several social justice causes, including womens’ suffrage.

As an organization dedicated to racial justice, Advancement Project National Office carries Douglass’ spirit in the work that we do on the ground for grassroots movements. In fact, our office celebrates his birthday in place of Presidents Day!

Hundreds of quotes exist out there which are attributed to Douglass’ teachings. But to determine what were his greatest quotes, we asked our staff to chime in by voting on their favorites. These were the nine that stood out from the rest.

#9 “Find out just what any people will quietly submit to and you have the exact measure of the injustice and wrong which will be imposed on them.”

#8 “Where justice is denied, where poverty is enforced, where ignorance prevails, and where any one class is made to feel that society is an organized conspiracy to oppress, rob and degrade them, neither persons nor property will be safe.”

#7 “The white man's happiness cannot be purchased by the black man's misery.”

#6 “I prayed for freedom for twenty years, but received no answer until I prayed with my legs.”

#5 “It is not light that we need, but fire; it is not the gentle shower, but thunder. We need the storm, the whirlwind, and the earthquake.”

#4 “I would unite with anybody to do right and with nobody to do wrong.”

#3 “Power concedes nothing without a demand. It never did and it never will.”

#2 “It is easier to build strong children than to repair broken men.” 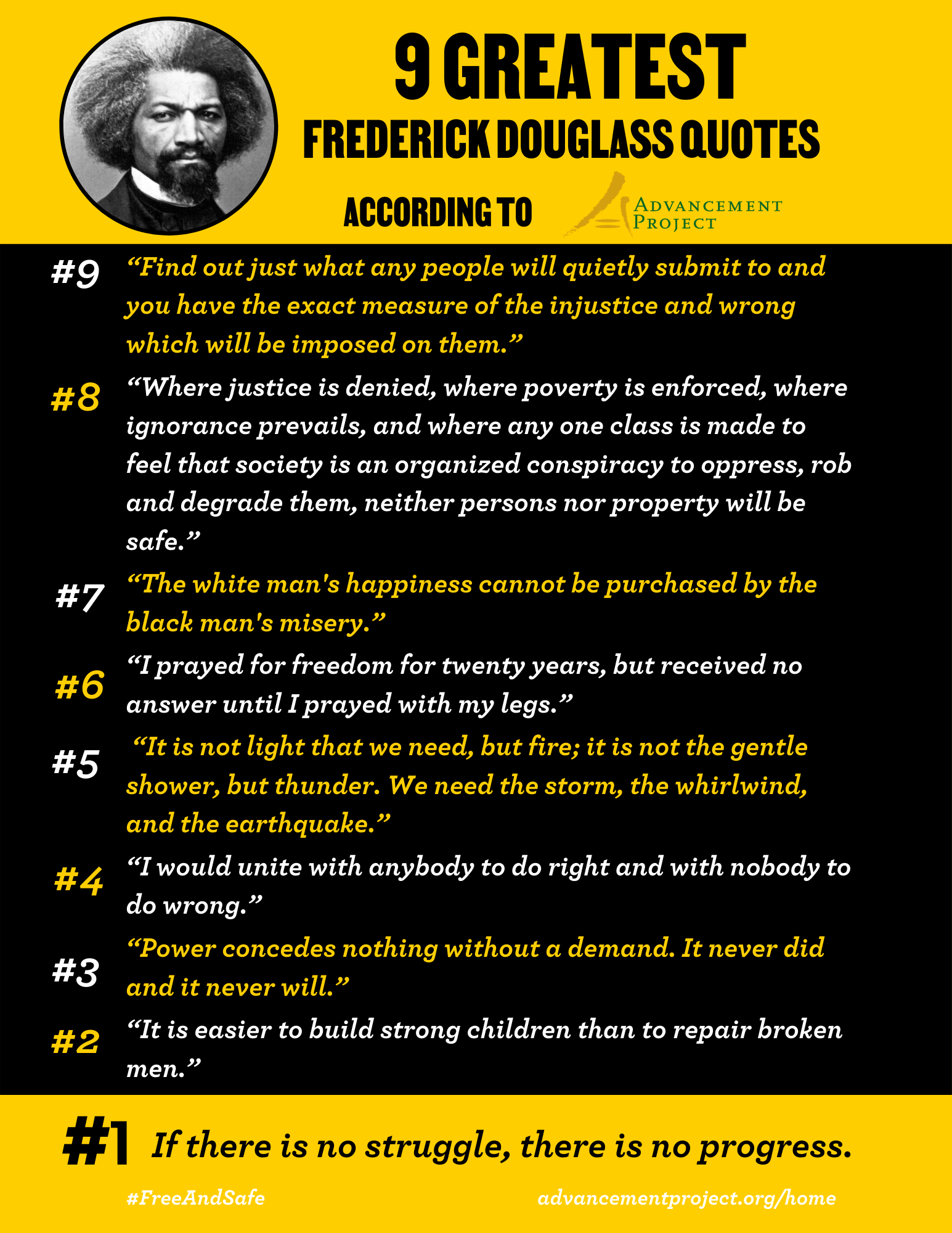 MEDIA CONTACT Jeralyn Cave jcave[email protected] 202-921-7321 WASHINGTON, DC – Today, the U.S. Senate introduced S. 1 – the For the People Act of 2021—a pro-democracy piece of legislation that aims to protect and strengthen access to voting, blunts the influence of dark money in politics and establishes anti-corruption measures for government. Advancement Project National Office, a 21st century civil rights and racial justice organization released the following statement. “Right now, at least 43 states have advanced legislation making it harder to vote on the heels of a historic election that saw record voter turnout,”…

‘Those who aim to obstruct the peaceful transition of power must be held accountable.’