In this New Administration, We Persevere

...after Congress and President Biden press reset to get our country back to 2016, we will want more. Our people deserve more.

It’s January, and we hoped for a peaceful start to our year but not so. 2021 has already given us a rollercoaster ride with an insurrection, an impeachment, and an inauguration. And all of this comes on the coattails of a challenging 2020. 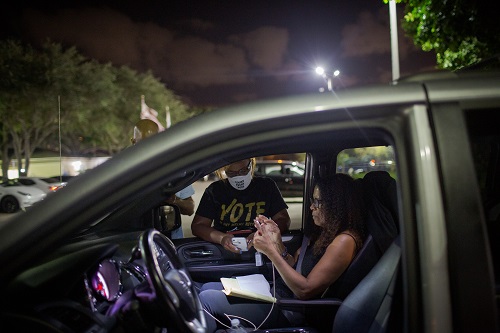 The past year was difficult for me. I have a daughter who graduated in May without pomp and circumstance. No prom, a virtual graduation and only a socially distanced barbeque to celebrate years of hard work. Our office shut down in early March, and our virtual reality started. My beloved hometown, New York City, was ravaged by COVID infections, which was difficult to witness and so many friends lost loved ones. And the murders of Black people at the hands of police added to a long list of victims of state violence, for whom I shed more tears. And this election year presented new voter suppression tactics that sought to force voters to choose between their health and voting. With all this, I learned that nothing can stop a group of people committed to freedom and justice.

This past year, Advancement Project National Office staff adapted quickly to our new circumstances and to respond to the pandemic—both seeking to free people from jails where COVID was rampantly spreading and to ensure protections for voters. We supported racial justice protesters from around the country connecting them to media and influencers. And our Police Free Schools work took off, as we elevated the misuse of law enforcement in our schools and won campaigns. We knew it was an all-hands-on deck year.

And with the start of the Biden Administration, there is great relief and a glimmer of hope that set in across our country. There have been a number of appointments to key roles that are promising, including civil rights lawyers like Vanita Gupta (Associate Attorney General) and Kristen Clarke (Assistant Attorney General for Civil Rights), and we will see more. President Biden, before inauguration, began to design and implement a plan to respond to the pandemic. He already signed a number of Executive Orders that our movements demanded, including an end to the Muslim Ban, extending the eviction moratorium, including undocumented immigrants in the census count, and student loan payment deferrals. In addition, the Biden Administration has established a team within the White House that will coordinate efforts across agencies on racial equity.

As this new administration and Congress get to work on things like COVID and racial justice issues, we must stay vigilant. As Isa Noyola, Deputy Director of Mijente, said about this presidential election, “we didn’t choose our savior, we chose our target.” This sums up our work. At the state and federal level, elected officials must be accountable to the record number of Black and Brown voters who turned out. But Black and Brown voters cannot sit on the sidelines just because the candidates they chose won. We must push for transformative policies from the Biden Administration, Congress, state legislatures, and local officials including prosecutors. We persevere not just for reforms that give us ineffective change, but for system overhauls that dismantle structural racism.

For Advancement Project, this all means our work has shifted but is no less demanding. At the federal level, we do not want another commission on policing, we’ve been there and done that, and Black people are still being murdered. We are not interested in additional funding for more police or a budget that doesn’t divest from the harm of police. Instead, let’s invest in mental health interventions and violence prevention, neither of which the police do.

We will support efforts to divest from police in schools both in the federal budget and a bill sponsored by Rep. Ayanna Pressley, Counselors Not Criminalization. We will support efforts to rid the impenetrable legal protections police are afforded that make them unaccountable. And of course, we expect that Congress will finally pass the John Lewis Voting Rights Advancement Act.

Our agenda will not always match that of the Biden Administration or Congress. We are pushing for “a country that does not yet exist”, as the late Dr. Vincent Harding used to say. So, after Congress and President Biden press reset to get our country back to 2016, we will want more. Our people deserve more.